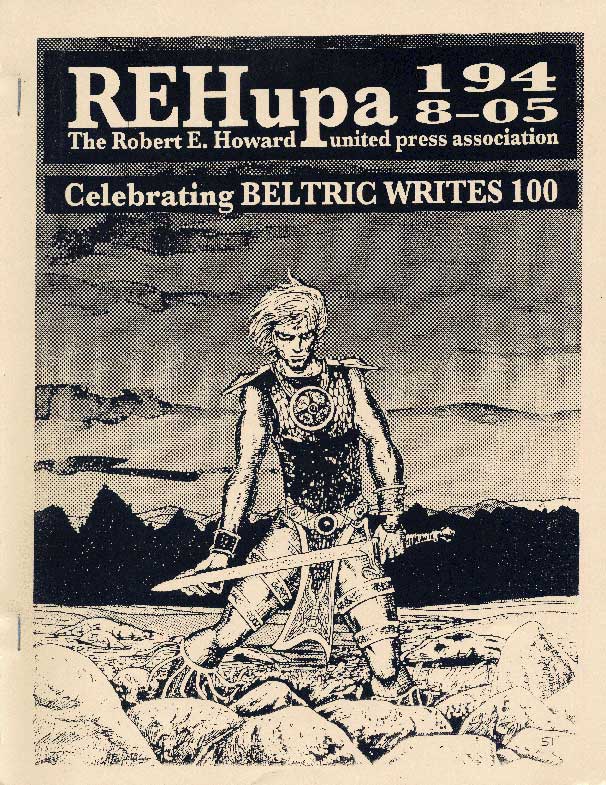 The latest REHupa arrived in early August, with the biggest news being that Steve Trout has logged his one hundredth ‘zine in the a.p.a. (his first ‘zine appeared in REHupa #21, a full thirty years ago). It is Trout’s own artwork that graces the cover of this small 142 page mailing. The a.p.a. continues to chug along on a full roster but a middling page count, the sustained anemia of which hasn’t been seen in REHupa for years.

In the Golden Caliph, Official Editor Bill “Indy” Cavalier announced a new member to REHupa’s ranks, Howard Days regular and Cimmerian reader Scott Hall, whose commentary on the event was enjoyed by readers of TC V2n4. Scott’s admission to REHupa’s roster brings it to a full contingent of thirty once again, with no less than three people on the waitlist waiting to get in.

The August issue of REHupa is usually the place to find Howard Days trip reports, and this year is no exception. Gary Romeo’s ‘zine The Howard Sprague Reader #4 gives his own impressions about Howard Days 2005. Much of what he wrote can also be found in edited form in The Cimmerian V2n4. Gary, ever the defender of L. Sprague de Camp and his place in Howard studies, gives a short summation of his goals to Dale Rippke in Mailing Comments:

Studies have shown that people in a group tend to start thinking alike. This causes the group to lose perspective and go into “group think” saying things like “So they take de Camp’s ideas without mentioning him, so what? Who cares?” I’m just trying to keep the breaks on that.

Patrick Burger contributes The Fighting Tribes of Cimmeria #36, his somewhat stuffy and academic REHupa ‘zine, one most at home discussing Howard in arch-symbolic terms. It’s Patrick’s 6th anniversary in REHupa (lately the retention rate for REHupans has been quite good) and he reports that he’s leaving Africa for his usual haunts of Canada and Germany. As a result, his ‘zine this time is a two-page assortment of odds ‘n’ ends, what we in a.p.a. parlance call a MINAC (MINimum Activity) ‘zine.

Danny Street, fresh off of his monster fifty-page contribution to the last mailing, takes it easy this time in Isaacson’s Legacy Volume 1 Number 15 with several pages of another staple of a.p.a. hacking, Mailing Comments. This is the section of one’s ‘zine where you provide feedback, commentary, and discussion to other members about their own ‘zines and the opinions expressed in them. Scott Hall for his part fills his first REHupa ‘zine with a nice Cross Plains trip report that is largely different from his commentary in The Cimmerian, and also engages in the ritual bashing of de Camp and pastichers that usually is a mainstay of first ‘zines. It’s always interesting to get new members in REHupa and try to guess how long they are going to hang around (for sure, there are plenty of valid reasons to quit the a.p.a., not the least of which is Getting a Life). Time will tell how long Scott’s tenure will be.

Charles Gramlich, currently embroiled in the disaster in New Orleans, contributes Razored Zen #77, preserving his unbroken streak of ‘zines in REHupa for over ten years. Motorcycle talk, a Cross Plains trip report, lots of Mailing Comments, and a humorous fictional Howard Days murder-mystery story are all presented. Jimmy Cheung’s Wolraven #14 reprints some fantasy fiction he wrote, while Scotty Henderson’s The Keltic Journal Volume 24 gives his historical research of Frontier Times, a magazine REH once contributed to and probably read frequently. Indy Cavalier’s Cold Steel #116 has his own Cross Plains trip report, and reprints the Brownwood Bulletin article also available on this blog.

Then we get to Mark Hall’s ‘zine Eidolons of El Cerrito Volume 5 Number 4, which if nothing else demonstrates the continued problems The Dark Man is having with maintaining any kind of relevance in the field. Mark has been Editor of The Dark Man for almost two years now, in which time they have released a mere two issues, both of them months late. In this new ‘zine, he has the temerity to rant not only at his critics but also his contributors, insinuating that a part of the failure of The Dark Man to come out regularly is theirs and not the editorial board’s:

The Dark Man is a biannual. Sure we missed it by 3 months for 2004, but did the world end because we missed it by three months? Did Howard fandom wilt away and die because of it? While it may have been irregular in the past, under my watch we are going to try and keep the bi-annual schedule. And yes, the next two issues are being compiled as I work on this!

And for one of you banding about the word “irregular” did it ever occur to you that maybe, if you would follow through on your review as agreed, we might be able to come out on time? It is not necessarily my fault that I am writing for your submission which is late and which you can’t formally tell me via email or a letter is going to be late or not submitted at all. It seems you clearly can’t even respond to an email asking about it. Is it standard practice to read the latest REHupa when someone is not following through on what they agreed to?

Next, as a bi-annual, in terms of the page count, this will mean about 90-120 pages a year. Which leads to my second point….

In the spirit of this “Did it ever occur to you…” theme, I can’t resist adding to Mark: did it ever occur to you that to harangue your own contributors—who are giving you material FOR FREE—for not “officially” notifying the editor of a delay, while simultaneously claiming that a three-month delay in releasing the next issue is no big deal—even when subscribers have PAID for that issue in advance—is not conducive to good editor-contributor and editor-subscriber relations? This toxic level of passive-aggressive delusion is the crux of what caused me to leave The Dark Man circa December 2003 and start The Cimmerian. One of the pleasures of editing The Cimmerian is helping frustrated contributors and subscribers migrate to a new REH journal experience, one that puts some much-needed fun and respect back in Howard fandom.

Morgan Holmes’s Forgotten Ages #76 was another low point of the mailing, as he spends his time dismissing out of hand the man who in my opinion remains the greatest movie director of all time, John Ford. Agreeing with an unnamed critic who calls even Ford’s very best work “sentimental cornpone” and “hoary hokum,” he dismisses The Quiet Man with the comment “excuse me while I yawn” and says that casting John Wayne was “Ford’s way of flunking an intelligence test.” He calls Maureen O’Hara a “nervous frigid uber-bitch” and opines that the original pulp stories are far superior to Ford’s adaptations. A rare clunker of a ‘zine by Morgan.

Frank Coffman, the former editor of The Dark Man, includes the latest issue of his ‘zine The Cross Plainsman, which attempts to convert some old pictures of REH into 3-D using a technique called “stereography,” and Frank even provides a plastic set of stereographic glasses to view them with. Unfortunately, I couldn’t get the glasses to focus in any meaningful way, and so 3-D Howard continues to elude me.

Jim Keegan’s Red Ruin #23 gives short full-color trip reports on both Howard Days and Comic Con in San Diego, while Steve Trout’s Beltric Writes #100 falls a bit short of the hundredth issues of previous milestoners Rusty Burke and Bill Cavalier, who presented huge retrospectives of their output over the years. Steve gives it a good try, but having read all his old ‘zines I think he gave himself short shrift.

Larry Richter joins Mark Hall and Morgan Holmes in the doghouse this time out, publishing in his latest The Highwayman a rather condescending overview of his Howard Days experience. Everyone rolled out the red carpet for Larry and his wife and made them feel at home during his first Howard Days, yet Larry reports that he found the whole event a “circus coming to town” filled with “drunk-in-the-dark, pavilion-infesting fandom,” then insinuates that of all the attendees only he knows or can know the Real Texas, the Texas of old with hardy pioneers and people who cared about more than money and petty modernities. You’re welcome, Larry.

The Mailing ends with ‘zines from Matt Herridge and Rusty Burke, both of which contain Cross Plains trip reports, a few Howardian-style poems from Steve Tompkins, an errata sheet from David Gentzel for his book The Riot at Bucksnort and other Western Tales, and a MINAC ‘zine of Mailing Comments from Tim Arney.

With the average page-count of mailings having fallen from the 300s to the mid-100s over the course of a few years, and with so many more options for reading Howard information available (The Cimmerian and this blog among them) it will be interesting to see if REHupa can survive in its present form. More than likely it will putter ahead as long as the old-timers of the a.p.a. maintain their memberships, but eventually the new generation is more likely to go online and create, say, a series of affiliated blogs that all talk about Howard.