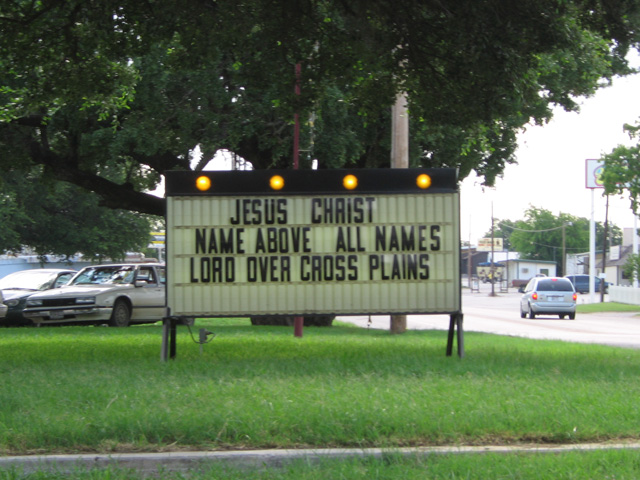 Every year at Howard Days, there is always one or two residents who resent the presence of Howard fans and attempt to make us feel unwelcome in somewhat hysterical fashion. This year, one church had a sign outside it:

Pretty innocuous and not immediately connectable to REH Days, until you remember what the theme of the 2005 Howard Days was advertised as: “‘Let His Name Not Fade…’: Interpreting Robert E. Howard in Books, Films and other Media.” This particular phrase was riffing off of Howard’s poem “Lines Written in the Realization that I Must Die,” which is filled with verse drenched in Howard’s depressive nature. One stanza of the poem reads:

Drums of glory are lost in the ages,

Let my name fade from the printed pages;

Dreams and visions are growing pale.

Twilight gathers and none can save me.

Well and well, for I would not stay;

Therefore, the meaning of titling the Howard Days theme “Let His Name Not Fade” is to challenge Howard’s bitter hopelessness with a celebration of his Life and Talent. To my mind, that’s a fairly wholesome and positive message. But as you can see, one of the local churches disagreed. That’s par for the course at Howard Days, although most people are kind and understanding, and they see Howard for what he ultimately is: a talented adventure writer. The library carries his books, Howard signs are painted around town, etc. Such silent protests are merely the sour grapes of a few ne’er-do-wells, and needn’t concern Howard fandom overmuch.

I deal with the Cross Plains Review fairly often when setting up publicity for Howard Days, and I know many people in Cross Plains and speak their lingo, so I wrote a letter that was part honest sentiment and part damage control. This letter was ultimately printed in the June 23 issue, and I received compliments and thanks from my contacts in town for sending it in:

On behalf of all of the guests who came to town last weekend, I’d like to thank the residents for their hospitality and many kindnesses. I have been coming to The Caring Community for six years straight, and I never tire of Cross Plains.

This year, one of the highlights of the weekend was having the opportunity to visit the Cross Plains Cemetery and pay my respects to the many friends I once knew who have left us, including Morris Cavanaugh, Joe Hanke, Jack Scott, Billie Ruth Loving and Joe Howser. I miss them all.

And a special thank you to the church that responded to the theme of the Howard weekend, “Let His Name Not Fade…” with a sign that read “Jesus Christ, Name Above All Names, Lord Over Cross Plains.” While no doubt intended as a slap in the face to godless Howard fans, it may surprise you to know that many of us are devout Christians and agree heartily with those sentiments. We come to your lovely town to celebrate the words of a favored author, but never at the expense of The Word.

All of this leads into the contents of several issues of the Cross Plains Review which appeared this June. The Review has been spotty the last few years, even since it was hijacked by a fundamentalist Christian editor—the aforementioned Vanda—who has turned the paper from a solid news mouthpiece into a blend of hard news and a strange concoction of bland self-help spiritualism. In particular, the nice drawing of the Howard House that used to be displayed on the masthead:

was replaced with a childish picture by one Deborah Lowitzer, which depicts a crucifix slamming down into Cross Plains on a map of Texas, like so:

Combined with the endless articles offering crude faith-based inanities written by the editor and others, the effect is more than a bit suffocating, and the paper has suffered as a result. Whereas before I used to read the majority of the paper, these days I am forced to skim through the empty calories. I’m a Christian myself—Roman Catholic, to be specific—and have great sympathy for like-minded people, but the least they could do is reprint some good apologetics for a change. Perhaps C. S. Lewis or G. K. Chesterton pieces, something that doesn’t smack of Oprah on a narcissistic soul-saving bender.

In any case, on June 16, 2005, the Thursday after Howard Days, a nice article briefly describing the event was printed in the paper, along with a reprinting of a short biographical essay about Howard that originally appeared in the debut issues of the Dark Horse Conan comic, and which was reprinted in the hardcover edition of those same issues.

This was followed by a large ad taken out by Project Pride which read:

Project Pride would like to thank each organization or individual who helped to make the Robert E. Howard Days 2005 such a huge success. Howard enthusiasts from at least seven states, Washington D. C. and London, England were here for the weekend and all had very positive comments about the hospitality extended them.

All in all, a nice battery of positive coverage.

So it was a small surprise to get a message from Project Pride, saying that someone had written a letter into the Review that criticized Howard and Howard Days in strong terms. I looked forward to reading it—my letter was appearing in the same issue—but once in front of me the argument against Howard was a letdown. The hilarious overreaction of the woman who wrote it brings one to the conclusion that a few people in Cross Plains have way too much time on their hands. Here is the letter:

I read with great interest the chilling expose of Robert E. Howard’s true sentiments and outlook regarding humanity and death in last week’s paper. The quote, “Barbarism is the natural state of mankind. Civilization is unnatural. It is a whim of circumstance. And barbarism must ultimately triumph,” is particularly disturbing.

It saddens me that Howard was drawn to the dark side of the underworld, of demons, sorcery and horror, and that the ultimate end to embracing this dark philosophy catapulted him into the inevitable pit of suicide. It seems Howard’s life was a short story of hopelessness, depression and finally death. It appears he lived a frustrated tragic life and his legacy is washed with darkness and despair.

I find it strangely satirical and perplexingly paradoxical that this wonderful city, that was given the name Cross Plains, (the representation of ultimate life, joy, hope and triumph over all death and destruction), holds a festival each year to honor and uphold a man whose life and writings defiantly manifest every belief and action contrary to those values. The irony of that is staggering and deserves to be re-evaluated.

The community of Cross Plains is worthy, valuable and deserves a yearly celebration that promotes life, not death. What kind of legacy are we unknowingly passing on not only to our children, but to our children’s children about the sacredness of life, or lack thereof?

I know that this will not be a popular letter, and I apologize for any offense that it may trigger, but let’s at least be willing to take a deeper look at the underlying current here and decide if promoting barbarism is really what we want to be known for as citizens of Cross Plains.

Yes—that’s the same Mrs. Lowitzer whose primitive sketch replaced the Howard House on the masthead a few years ago. Like the church sign ploy, the weak arguments made above aren’t worth worrying about. In fact, in the succeeding weeks a few townspeople I had never met rose to the defense of the event, basically chiding Mrs. Lowitzer for taking her disturbance at the “chilling” aspects of REH a bit too seriously. What’s next? Implore Tarzana, CA to rename their city after someone more godly than Burroughs’s iconic character? And my Texas Handbook tells me that the name “Cross” Plains came to us because a series of Army trails crossed there and not because of any religious significance. In light of this, the attempt of Mrs. Lowitzer to use the word as a scion of her argument is just plain weird, not unlike psychotic minister Louis Farrakhan using kooky numerology to prove his various theological points. But this shows how year after year, there is always someone trying to make mountains out of molehills and derail the best tourist attraction the town has going for it.

This letter reminded me of an experience I had in Cross Plains several years ago. Michael Scott Myers (the screenwriter of the Hollywood movie about Howard’s relationship with Novalyne Price, The Whole Wide World) and I had walked into the local barbershop in Cross Plains to look at some old pictures posted there. If you are ever in town I recommend it: there are pictures of the oil derricks, old pictures of main street, even pictures of Howard friends like Lindsey Tyson. Anyway, while in there an old crazy-looking man asked us in a shrill preacher’s howl, “Are y’all some of them fans of that fella Bob Howard?” When we answered in the affirmative, the man proceeding to harangue us in a fire-and-brimstone yell: “Robert Howard kilt hisself and went  straight to hell, and you will to if y’all don’t stop reading that devil’s business!” The barber, Ray Purvis (who serves double duty as the town mayor) told the old man to shut up, and told us to pay him no mind. “He’s just the town kook,” Ray said, probably in an attempt to make us feel better. We left without taking the guy seriously, but it made an impression in one sense: it gave us a taste—just a taste mind you—of the kind of forces Howard was up against when writing for the pulps in an old-school western town.

Cross Plains has come a long way over the last seventy years, but vestiges of Howard’s time—not all of them palatable—still remain.