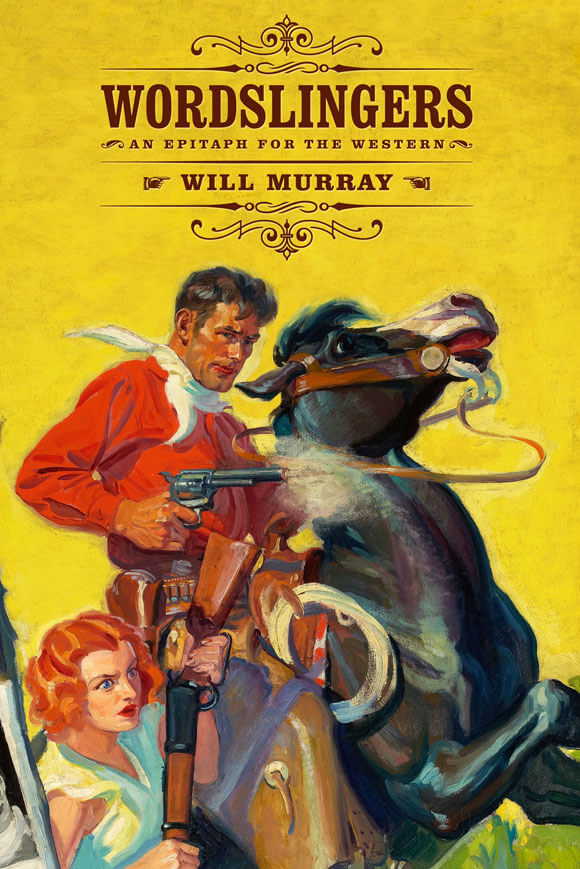 Just finished last night Will Murray’s history of the Pulp West, Wordslingers: An Epitath for the Western, over which broods the titanic somber shadow of Robert E. Howard.

Yeah, REH is hardly mentioned in the book — I think his pal Harold Preece is quoted more often. But note the sub-title. When Murray selects a quote from a writer to use as the actual Epitath after over 400 pages of pulp history, he selects a page from “Robert E. Howard, Texan” which begins, “Well, they have gone into the night, a vast and silent caravan, with their buckskins and their boots. . . .” After that archly poetic farewell, you have a Gallery of images of many of the pulp fictioneers covered in the book, and an Index.

Seldom has a tribute to REH been so well-placed, rarely have his skills as a wordslinger been used to such effect.

And if you are among the fans who are certain Howard was going Full Western in his writing, here’s a book that shows you in detail what he was getting into. From origins in the Dime Novels and the birth of the Cowboy Hero in Wister’s The Virginian, the Pulp West exploded onto the newsstands, lasting longer and out-selling everything in its path while it lasted. Murray uses articles and interviews from contemporary sources such as Writer’s Digest to build his history, a story of actual westerners such as Howard vs. faux gunslingers pounding the typewriter keys east of the Hudson River. A tale of editors who always wanted something “different”than six-shooter action, and steadily rejected the new in favor of gun-dummy gunplay and the strategic stampede.

A book for writers and people who think about being writers — and what their spiritual ancestors had to deal with issue after wood pulp issue.

Sure, I could wish that instead of mentioning “Texan Eugene Cunningham” that Murray had gone with “Gene Cunningham says he was born bow-legged in Texas” — Cunningham is one of my faves (and REH had his classic book on gunslingers, Triggernometry, in his personal library).

But for any slight quibble you get tons of info you’ve never heard of — say, about the obscure pulpster Lauren Bosworth Paine who got edged out of the American magazine market but “went on to write a staggering one thousand plus Western novels under 90 pen names — all for British publishers not stuck on the pulp myth.” Whoa.

If Howard shot himself, we learn so did John A. Saxon — and pulp Western superstar Walt Coburn hanged himself.

The quoted material is great, and Murray ties it together like the master he is and every now and then showcases his own skills. I dog-eared this moment: “Perhaps it was the psychology of the liar coming to believe his own fabrications, but the Western writer began to assume a growing importance in his own mind, somewhat akin to a historian.”

Great book. A must have for anyone thinking about mentioning Howard and the Western market either in an essay or idle conversation during Howard days.

One thing I noticed in particular: again and again Murray mentions how humor was pretty much forbidden in the Pulp West, but for a few writers such as W.C. Tuttle who made it their bread and butter. Yet when Howard pulled the trigger on June 11, 1936 he had underway no less than three humorous Western series for three different pulp mags. That, my friends, is success — ripe to be followed by more success.

And personally I think Howard could have brought that same skill and success to more fantasy yarns, if he’d been inclined. As I’ve said, yeah, he could have taken Conan straight from Weird Tales over to Argosy. What fool would doubt it?