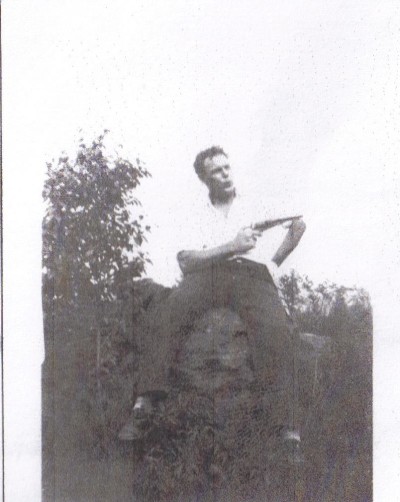 Two recent suicides each cast red glimmers of insight into the complex motivations underlying Howard’s own end. “Thompson’s Death Marks the Passing of a Literary Era,” the headlines proclaimed. Hunter Thompson — author, iconoclast, curmudgeon extraordinaire — had committed suicide, shooting himself in the head in his kitchen, fulfilling an apparently long-standing wish. Robert E. Howard had killed himself with a Colt .38 automatic; Thompson, having a bigger head by a number of degrees, felt impelled to use a .45.

Thirty years earlier Thompson had invented “gonzo journalism,” using drugs, outrageousness, lies, and style to entertainingly blur the lines between reality and fiction. Howard created what could well be termed gonzo adventure, an eclectic mix of genres, cultures, and over-the-top violence that established a literary icon — The Dark Barbarian of Don Herron’s fancy — and created a new genre — Sword-and-Sorcery — influencing a host of writers over the last century in the process. Both Thompson and Howard have shot across the literary stratosphere like burning stars, with prose that people considered dangerous and subversive. In books with titles such as Generation of Swine and Songs of the Doomed, Thompson painted a decadent civilization ripe for falling, filled with what The Nation‘s Richard Elman once called “those who are doomed to lose.” In his breakthrough study Hell’s Angels: A Strange and Terrible Saga, one feels acutely as if Thompson has entered Howard’s barbarian mythos:

[They are] the first wave of a future that nothing in our history has prepared us to cope with…There is not much mental distance between a feeling of having been screwed and the ethic of total retaliation, or at least the kind of random revenge that comes with outraging the public decency.

Thompson’s tales of drugs and adventure were a mythmaking akin to Howard’s painting 1930s Texas as a short half-step away from the bloody Wild West of the 1880s. Gay Talese said of Thompson that “You never know what these people do…they know what is entertaining about their material, and sometimes what is not true about their life becomes part of their persona.” Where Thompson used drugs to achieve that blur, Howard used history.

“Loathsome” was a word that Thompson embraced, considering it a badge of counterculture honor. He was such a virulent purveyor of slime that some industrious fans were able to construct a Hunter Thompson Insult Generator, available on the web. Like Howard, Thompson needed enemies as a foil for his rage, without which rage turns in on itself and consumes its host. He spat out vitriol towards anything that smacked of the American Dream, while the whole time hypocritically lamenting the dream’s passing. Four decades earlier Howard grieved over the passing of his own American Dream — one where if only the frontier had still been there to shoot and fight his way across, everything in life would have been grand. In lives dominated by neurosis, loneliness, and low self-confidence, shock and outrage were sources of strength and succor. Upon Nixon’s death Thompson wrote “He Was A Crook” for Rolling Stone, subtitled “Notes on the Passing of an American Monster,” the pathetic tastelessness of which betrayed a bitter man who demanded honesty from everyone but himself. Faced with such displays of childish hatred passing for hip political integrity, we have to wonder whether Thompson ultimately killed himself because he simply could no longer find ways to outrage readers like he used to, his late bashing of George Bush merely quaint considering the avalanche of similar nonsense now found in every newspaper and on every television. No longer is it taboo to slam politicians with the ferocity he used in Fear and Loathing: On the Campaign Trail. When one’s rep as a counterculture hero begins to pale into kitsch, where is there left to go?

Had Howard lived, might he have had the same sort of front-heavy career? Writing for three decades more, perhaps marrying and mellowing, and ultimately never re-attaining the heights reached in his youth? If so, Howard saw the writing on the wall and got out while the getting was good. For decades Thompson waited for the rebirth of the revolution he helped create and watched dissipate, and only after that hope had dimmed irrevocably did he feel the need to pull the trigger. By the end his health was failing. Spinal surgery. A broken leg. Shades of Howard famously considering himself over the hill at thirty years of age, bedeviled by a “weak heart,” “black moods,” and problems as outwardly minor as having slipped in his boxing skills.

Boxing brings us to the other recent suicide in the news, the death of Najal Turpin, the twenty-three year old pugilist who fought on a new reality TV series from Survivor impresario Mark Burnett entitled The Contender. In the course of the show he met superstar Sylvester Stallone and competed in a series of matches slated for national television. Even given that he must have been depressed for some reason, it’s amazing that he killed himself so soon after such a career highlight, and before the show has even debuted to what could have been hit status. What was he thinking? Had his performance in the show forced him to face the same demons as Howard and Thompson, namely the specter that he was in his “sere and yellow leaf,” that his best days were behind him? Turpin shot himself in his parked car, just like Howard, but with his girlfriend in the seat next to him, his own personal Novalyne bearing witness to his destruction.

Turpin’s manager stated that the suicide “had a lot of stuff on his mind,” including the recent drive-by murder of a boxer he had been friends with. Howard’s self-destructive tendencies may have been similarly birthed via the suicide of a high school classmate in his teens, along with the deaths of young friends like Herbert Klatt. It would seem, and not surprisingly, that boxers have a heightened sensitivity to the waning of youth and strength, often the one part of their lives that fills them with confidence and calm. Once taken away, the thought of living the rest of their lives weak both physically and emotionally is too much to bear.
If Turpin’s girlfriend can be seen as a substitute Novalyne, then Hunter Thompson’s lawyer has acted as his own Dr. I. M. Howard, providing context and trying to extrapolate intent:

Tobia [Thompson’s lawyer]…said he spoke to Thompson at least five times in the last week, as recently as the day before he killed himself…his client and friend did not leave a note, only conversations and obscure directions he had issued to friends and family in recent days…”This was definitely not spur of the moment,” said Tobia…”He arranged to have things dealt with, and he wanted his family close by, but he didn’t want anyone to know — he didn’t want anyone to try to stop him. In a weird way, he wanted it to be, I think, a celebration.”…[Tobia] noted Thompson has written about suicide and talked about it with friends…”He didn’t want to waste away,” Tobia said. “He did not want to exist as an invalid or as someone who needed constant care. It wouldn’t suit his sense of self.”…”There was no one thing you would point to and say, ‘Oh…he’s going to kill himself,'” Tobia said. “It wasn’t clear last week suicide was imminent, but now it adds up.”…”I was numb last night,” he said yesterday. “But when that settles in, the phone calls, things start to come back, and things begin to make sense…We all had hints, but none of us had the full picture.”

Like Thompson’s in 2005, Howard’s death in 1936 marked, if not the end of a literary era, then the beginning of the end. Lovecraft was soon writhing in the throes of terminal stomach cancer, while Clark Ashton Smith abandoned the increasingly lonely halls of Weird Tales and retreated to his solitary cabin and his poetry. The pulps themselves soon vanished under the first waves of the paperback era. Soon Howard’s world was gone, leaving only stories and a dwindling number of grizzled veterans with bittersweet memories. Thompson had been one of the grizzled veterans of his generation for many years, before finally deciding to join Howard in the same oblivion which swallowed up both their worlds, worlds they made famous and which they ultimately couldn’t live without.

Shadow worlds of hate, energy, violence, and outrageousness are not only what took Howard from us, but also what gave him to us in the first place. Perhaps de Camp wasn’t too far off the mark when he posited that only people depressed or deranged enough to kill themselves can write of dangerous and bizarre things with such intensity, belief, and consistency. Samuel Johnson’s maxim “He who makes a beast of himself gets rid of the pains of being a man” is how Fear and Loathing in Las Vegas begins. Methinks one could easily substitute “barbarian” for “beast.”